When will people realize that the person most deserving of their undivided attention, is the person that is physically right in front of them?

Everyone wants to believe that "screen addiction" is a modern problem.  I say that they (everyone who thinks that) is wrong.  When the television was invented and brought into our homes--that was the beginning of screen addiction.

I grew up in a home with one television. That was one too many. Some people grow up with several televisions-- this is the beginning of screen addiction.

When we choose to look at a screen and invest ourselves in the content there, and choose THAT over a conversation with someone right in front of us.....that is screen addiction.

Screen addiction is a very personal topic for me to discuss. Television, video, screens, etc have been responsible for the most unhappy times in my life. I can never be free of  the television  Evidently it is a permanent part of our life.  This is a struggle for me.  Most days I want to grab the shotgun and send that black box to kingdom come!

It is also a struggle for me to accept that my interests, stories, ideas, and dreams are not quite as riveting as those on the 24 hour news cycle. Maybe if I dyed my hair blonde and sat on the sofa while wearing a really short skirt showing lots of leg.....maybe then my story about tomatoes would be just as riveting?

I am living a life in which I am trying to find solutions to the ills of the world.  Trying to protect myself, my home, and my family. This is so much more worthwhile an endeavor than living  life as a spectator watching all of the horrors and controversies of the world played out on a little screen. What does this accomplish?  What does this enable you to do?

Maybe you can converse about health care, walls, Comey, and nuclear bombs......

But I can grow tomatoes and potentially feed myself.

Eh, when will I learn?

Is there a 12 step program for screen addiction?

We could sure use one around here.
Posted by Lifeonthewink at 6:36 AM 4 comments:

Although I've been gardening since 1991 when we bought our first home, gardening in the state of Maine has been quite a challenge for me.  The environment:  short growing season, rocks & boulders, trees & stumps, no soil, cooler temperatures.  I have had more disappointing seasons than successful ones.  Some of the disappointments have been the result of my trying to garden here like I did in New Jersey (the garden state), my lack of consistent enough watering in raised beds, and my lack of commitment to building soil myself.  This year I decided that I was going to try harder and I was going to give it my all to have a successful season.  However I know that some things can and will be out of my hands (weather)

One of my goals for this year was to start seeds indoors so that I could spend less and get more.  That being said, starting seeds and growing seedlings that have a fighting chance of making it does require some initial and ongoing investment.

First up was deciding what kind of set up I wanted to have.  My seed starting nursery had to be in my dining room, and I have a cat.  Those two facts were considered in my design decision.  I know a lot of people buy shelving units for this purpose but it just didn't seem to fit with what I had in mind.
So I asked my husband to build an open sided box with a perforated plywood top that could sit on top of a spare table we already have.  The size was determined by what and how much I planned to start from seed. 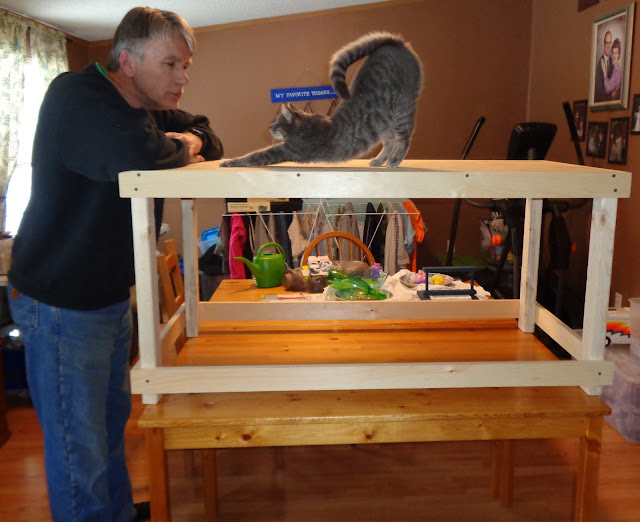 He drilled holes all over the plywood top for air flow and the bottom board is up a little from the bottom so air can flow under.  We purchased clear plastic shower liners and cut them and attached them with velcro circles to the sides.  The reason for this was two -fold:  the kitty and it is still cold here in Maine in March/April.  The liner was easily raised for watering and for additional ventilation.
We hung two 48 inch fluorescent shop lights and we were ready to go! 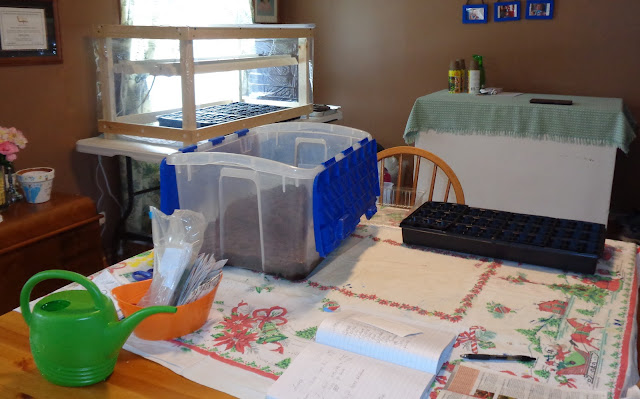 After a trip to Walmart for organic seed starting mix and those trays with the cell packs, plus a couple of packages of jiffy pots and I was ready to start planting.  My seeds I purchased from Pinetree Garden Seeds here in Maine.

I had learned from watching a ton of youtube channels that you should dump the potting mix in a tote and wet it until it held together, then spread it into your cell packs and pack it down.  Once that was done I got down to the tedious business of planting the seeds. 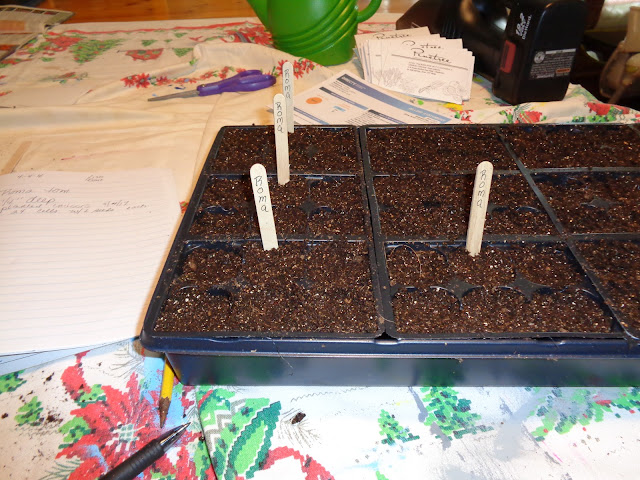 I used a pencil to make the planting hole and pop sticks to mark them.  I also wrote down lots of info in  my gardening journal.  I planted 24 cells of Roma Tomatoes and I ended up with 22 seedlings!!!

Just in case you are curious this is a list of what I planted:

Everything germinated except for one type of lettuce ( I tried twice so I'm going to e-mail the company).  Everything grew and everything is now outside!!!!  so exciting!!! 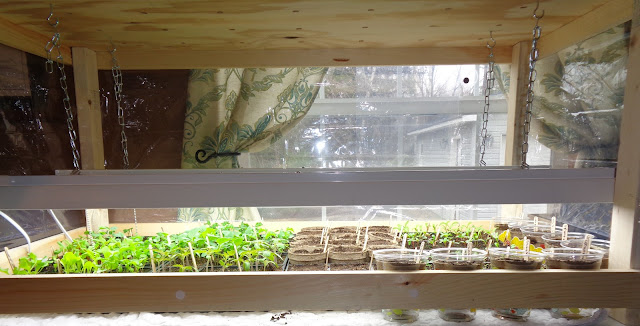 I kept the clear dome lids on until they germinated and then lowered the lights and turned them on.  I actually put the lights on a timer to go on at 6 a.m. and off at 10 p.m.  The plants thrived! 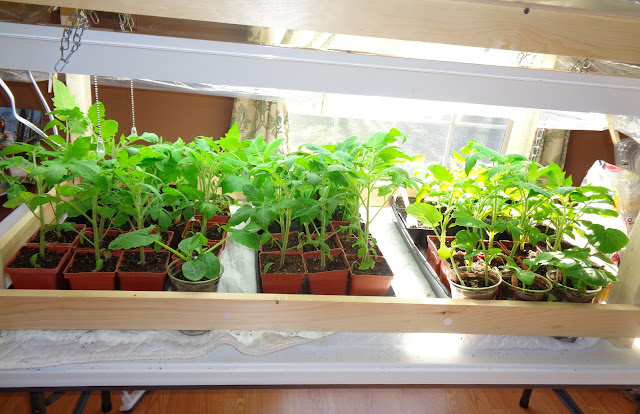 The cool weather things (greens)  were able to go outside in 4 weeks, so that is when I repotted the tomatoes and the basil. 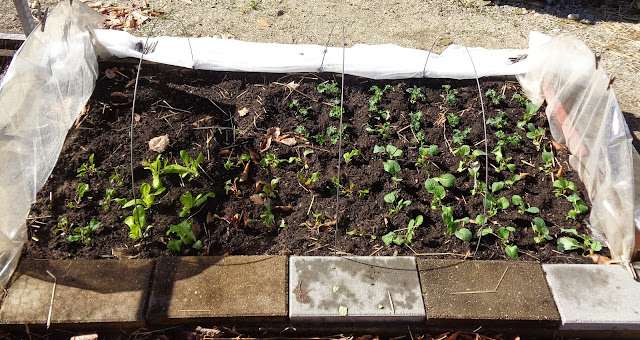 I transplanted all of the greens to a bed with a cover for a few weeks.  I planted them close together and now I am in the process of transplanting them around the garden.

I really feel that my first experience with seed starting was a success.  I will be able to use the set up we came up with for years.  I even have plans to build up onto it and plant more next year!

Here are a few basic things I did (that I learned from others on the internet) that I believe made my endeavor a success:

1.  prewater the potting mix--it holds the water better
2.  I didn't have heat pads (expensive!)  so for the first week I ran my space heater nearby.  I think it worked because all of the seeds germinated in under 5 days.
3.  once the seeds germinate take the plastic dome off.
4.  water seeds with a water bottle on mist and keep moist
5.  once sprouted water from the bottom--add water to the tray
6.  some algae growth on the soil is normal--increase ventilation and keep the surface of the soil "scratched"  I used a plastic fork, so that it doesn't repel water.

**It was easy for me to keep a constant eye on my plants because they were right in my dining room.  I recommend that you put your set up where you can pay attention to the seedlings and catch any issues immediately.

**I think my expenses to start these seeds was about $250 including the seeds (I have leftovers to plant directly outside also).  Obviously the seeds and the cell packs and potting soil are consumable so will be an expense each year.

**I hope some of this information is helpful to other newbies like me!
Posted by Lifeonthewink at 10:25 AM No comments:

"bleep" or get off the pot!

Okay, okay, okay!
That title is a little harsh,
but it's how i'm thinking this morning!

Thirteen years now.
What direction do I want it to go in?

Do I want to put ads on and grow my followers and make a little money?

I'm not sure.  Sometimes I can be a bit opinionated!!!

Do I want to be honest?  informative?   inspirational?  helpful?   creative?

All of the above?

It's time to get serious.

GET MOVING OR GET OUT OF THE RACE!

Not that blogging is a race.....I would love to get better about it.  I'm just so all over the place most of the time.  It's time to sit and think and write.

Let's get going!
Posted by Lifeonthewink at 6:19 AM No comments:

Email ThisBlogThis!Share to TwitterShare to FacebookShare to Pinterest
Labels: blogging

"In this wasteland, where I'm living, there's a crack in the door filled with light.
And it's all that I need to get by."    (Needtobreathe)

Those two lines above are so filled with hope.

This world is temporary.
Heaven is eternal.

And it's right there.
God is right here.
With us.

There is a reason for all of this.
And the older I get, the clearer it becomes.

Knowing what I know,
Knowing what is truth,
We are all on the same team.
We need to look past the masks.
The way I feel.
The fears I have.
I need to see it in others.
Then I can have compassion.
Then I can feel free to share what I know to be true.

Our hope shines through that crack in the door and it is our job to point that out.
Posted by Lifeonthewink at 6:35 PM No comments:

The power to make sense out of life.

No one can just pick up the Bible and totally understand it.  We believe, then we trust in God's word.
The understanding takes time.  It takes immersion in the word every day.

But unlocking the treasures of God's word and understanding the seemingly un-understandable takes time.
It takes fellowshipping
It takes being willing to learn, a willing heart.
It takes patience and trust.

I promise it will all make sense one day.
A bit here, a bit there.
Those questions that non-believers ask about some Old Testament stuff.
One day you will see more clearly and have an answer.

The basics of the nature of God.
What a holy God requires from His people.
How to walk in the light.
These are the things to learn first.

So many questions.
Sometimes it doesn't make sense.  It doesn't "fit" with the world.

At some point in the future you will step back and see a glimpse of the whole picture....
and you will still trust.

Until one day it all becomes crystal clear and we see Jesus face to face.
Posted by Lifeonthewink at 3:34 AM No comments: